Arriving early at Jo’burg airport after an overnight flight we were met by our guide, Dylan Vasapoli and taken nearby to Outlook Lodge where we had time to wash and change. Then off to a nearby reserve, Korsmans Bird Sanctuary. This reserve is in the middle of an enclosed housing area and comprises a lake, grasslands and reed beds. Home to a large number of birds we spent two hours walking a few hundred meters and found 47 species, plus one, but more of that later.
Always a wonderful sight is the Grey Go-away bird, but more difficult to see were the Lesser Swamp Warbler, Black Crake, Little Bittern, Green Wood Hoopoe, Red-knobbed Coot, Thick-billed Weaver, and Red-headed Finch.
Also, in the Reserve were Goliath Heron, Swainson’s Spurfowl, Spur-winged and Egyptian Geese, Greater Flamingo, Intermediate Egret and many others.
The contentious bird was a Black Swan. A pair were nesting in the Reserve, but they are not indigenous and not included in the accepted list of South African birds. Nevertheless they were present and breeding.
We then went a short drive to Eikenhot, about 30 kms from Jo’burg. A grassland area with rolling Acacia hills. Here we had Brown-backed Honeybird, Desert and Cloud Cisticola, Quail Finch, Spike-heeled Lark, Wattled Lapwing, Reed Warbler and Orange-breasted Waxbill.
We were grateful to get back to our Lodge for an early night.

Day 2. 10th March
We had a 30mns drive to the 25,000-hectare Rietvlei Reserve near Pretoria which was created around a large reservoir. This reserve also has a wide range of mammals including White Rhino and Buffalo, Blesbok, Wildebeest, Zebra and Red Hartebeest, many of which we passed as we drove around this large area.
Here we saw Ostrich, Palm and White-rumped Swifts, Spotted Thick-knee, Darter, Hamerkop, Brown Snake-Eagle, Striped Kingfisher, Crimson-breasted Shrike, Cape Grassbird, Levaillant’s Cisticola, Groundscraper and Karoo Thrush, Red-collared and Long-tailed Widowbirds, Cuckoo Finch and Cape Longclaw.
Then we went north to Rust de Winter and the fabulous Zenzele River Lodge where we stayed for three nights. This Lodge is located 5kms down a track through their own estate of mixed acacia thornveld and broadleaf woodland. On the banks of the river our splendid private chalets overlooked the river and a steep bank the other side covered with trees and bushes where at night monkeys came to roost. We immediately went out and had excellent views of Pearl-spotted Owlet, Red-throated Wryneck, White-crested Helmetshrike, Black-headed Oriole, and Crimson-breasted Bunting.

Day 4. March 12th
We left the Reserve and after a short drive on a tarmac road we joined a track, known as the Zaagkuildrift Road, which went for 25kms to the village of Kgomokgomo, driving all the way through open dry acacia thornveld. There were an astonishing variety of birds for what appeared as a dry barren landscape. When we reached the village we drove for a few minutes along a raised road overlooking a flood plain, which was now mainly dry grassland, with a river and a few marshy areas.
During this time we saw Cape Vulture, Wahlberg’s and African Fish Eagles, Black-winged Pratincole, Eurasian Hobby, Wattled Starling, Marico Flycatcher, Marico and White-bellied Sunbird, Knob-billed Duck, Red-billed Teal, Diederik Cuckoo, Great Egret, Black Heron, Southern Red-billed and Yellow-billed Hornbill, Greater Honeyguide, Lesser Grey Shrike, Long-billed Crombec, Rattling Cisticola, Black-chested Prinia, Crimson-breasted Warbler, White-browed Scrub-Robin, Lilac-breasted Roller, Red-billed Buffalo-Weaver, White-browed Sparrow-Weaver, Scaly-feathered, Lesser Masked and Southern Masked Weaver, Yellow-crowned Bishop, White-winged Widowbird, Jameson’s Firefinch, Green-winged Pytilia, Shaft-tailed Whydah and Village Indigobird. Many more species were also seen.
Later in the afternoon we went to a wood by a small stream and after walking through very long grasses, through bushes and over rocky ground we eventually found our target. Verreaux’s Eagle Owl. We had both flight shots as well as good views of them looking at us. By chance we also saw Cape Penduline Tit.

Day 5. March 13th
An early morning saw us birding the grounds before walking up the river in front of the Lodge and then climbing the escarpment on the other side to the top and then walking through broad leaved woodland. Here we saw Natal Spurfowl, Emerald-spotted Wood Dove, Speckled and Red-faced Mousebird, Golden-tailed Woodpecker, Lanner Falcon, Chinspot Batis, Black-backed Puffback, Magpie and Red-backed Shrike, Paradise Flycatcher, Southern Black Tit, Rufous-naped Lark, Arrow-marked Babbler, Cape and Burchell’s Starling, Kalahari Scrub-Robin, Blue Waxbill, Southern Black Flycatcher.
Late morning we said farewell to this fabulous Lodge and drove for 4hrs to Magoebaskloof. However, we had one stop to find the Short-clawed Lark. On a wide-open sloping hillside near Masealama, we repeatedly heard its call as it moved from one low bush to another, but despite a long time searching for it we had to leave to complete our drive. Very frustrating.
The Magoebaskloof hills are blanketed in pristine afro-montane forest and most of the time we birded from the roads running through the area. We stayed 2 nights at the Magoebaskloof Hotel, beautifully located set on the side of a hill with magnificent views down the valley. This afternoon we went to the Woodbush Forest Reserve around 1500mtrs above sea level where we saw Black-fronted Bushshrike, Yellow-throated Woodland Warbler, Bushveld Pipit, Black-throated and Yellow-fronted Canary and Golden-breasted Bunting.

Day 7. March 15th.
We went for a walk on the hillside in front of the hotel, but unfortunately the path became steep and overgrown. However, we did see Brown Scrub-Robin, Barrats Warbler, Greater Double-collared Sunbird, Sombre Greenbul and Green-backed Camaroptera.
Then we had a 4hr drive to Jo’burg airport where unfortunately the flight to Cape Town was delayed so that by the time we arrived at our hotel in Paarl it was dark and we needed dinner.

Day 8. March 16th
Driving north from Paarl we headed into the dry mountainous area heading for the Tankwa Karoo. It was a 4hr drive, but we stopped on the Du Toitskloof Pass, where we walked along the eastern flank which is in the southern part of the Cederberg Mountains. The habitat is mountain Fynbos, low scrubby grassland with fantastic views of mountains in the far distance. Here were Orange-breasted and Southern Double-collared Sunbird, Cape Sugarbird, Cape Canary, Southern Boubou, Alpine and African Black Swift, Sacred and Hadada Ibis, Neddicky and Greater Striped Swallow.
Down into a valley then up to 1000mtrs going over the Gydopas where we stopped and found Grey-backed Cisticola, Cape Bunting, White-necked Raven, Red-winged Starling, Fiscal Shrike, Dusky Flycatcher. From here we had stunning views of the Ceres Valley and our destination.
We passed through Ceres and joined a track and drove almost in a straight line between mountains in a wide flat plain for 80kms before turning off onto a narrow track. This led up a valley for a few kms before reaching an unbelievably beautiful and isolated location where there were a small group of individual rustic lodges, with all facilities, spaced out at some distance from a central lodge where we met and had meals and drinks. Had we kept on the main track it would have been another 120kms before we would have reached a village.
In the evening we walked up the stony track across a dry stream bed finding Protea Canary, Fairy Flycatcher, Karoo Scrub-Robin, Karoo Chat, Crimson-breasted and Layards Warbler, Long-billed and Nicholson’s Pipit and Lark-like Bunting.
We were looked after and fed very well by our two very friendly hostesses where we stayed for 2 nights at Hartnekskloof Guest Lodge.

Day 10. March 18th.
We only drove a short distance before stopping at a small marshy area in the hills with low reedy grass. Here Dylan walked about 3 meters into the reeds stamping them down so that a narrow channel into the reeds was created. We waited in anticipation for over 20mns as we could hear our target calling from just in front of us. Then slowly out across the channel walked the bird of the tour. A male Buff-spotted Flufftail. Fantastic. In the same reed bed we also saw a Little Rush Warbler.
Now we settled down for a long drive to Langebaan. But the scenery was again stupendous, particularly passing over Skittery Kloof Pass where we saw Cape Clapper Lark, then over another pass, Katbakkies, to another vast plain where we joined the road to Velddrif. On our journey, not only did we see Blue Crane and Booted Eagle, but we passed spectacular sandstone rock formations with conical hills dotting the landscape called Koppies.
We stopped at the Veldrif Salt Pans, a vast area of different coloured pans, ranging from deep red to clear blue. Here we saw Red-necked Phalarope, Chestnut-banded and Kittlitz’s Plover, Cape Teal, Caspian Tern, Lesser Flamingo and Rock Kestrel.
We stopped at a quarry for ‘sundowners’ and had great views of 2 roosting Verreaux’s Eagles perched on the quarry face. We also had White-throated Canary and Familiar Chat. We then drove on to our guest house at Langebaan.

Day 11. March 19th
Today we spent all our time in the West Coast Nation Park. An area of 32,000ha of pristine ‘Renosterveld’ vegetation, there is also a large lagoon at its heart, as well as beaches and sand dunes. A fantastic variety of habitats which are home to a wide range of species. It also has a restaurant located by the shore of the lagoon from where you can walk to a hide located over the water. In the Park we saw Bokmakierie, Cape Bulbul, Capped Wheatear, Great White Pelican, Bank, White-breasted, Cape and Crown Cormorants, African Black Oystercatcher, Cape Spurfowl, Cape Shoveler, African Swamphen, Curlew Sandpiper, Pied Avocet, Three-banded Plover, Hartlaub’s and Kelp Gulls, Greater Crested Tern, Black-headed Heron, Grey Tit, Pearl-breasted Swallow, African Spoonbill, African Hoopoe, Pied Kingfisher, Spike-heeled Lark and African Reed Warbler. This is a short list of the species we saw.
At dusk we made our way back to have an enjoyable meal at a local beach bar and celebrate our tour, and to thank our incredible guide, Dylan.

Day 12. March20th.
As we had to go to meet friends some distance away, we left early and drove to Cape Town airport where we said a fond farewell to Dylan.
In total we saw 320 species (plus 1 Black Swan) in a wide range of different and stunning habitats. A truly enjoyable tour. 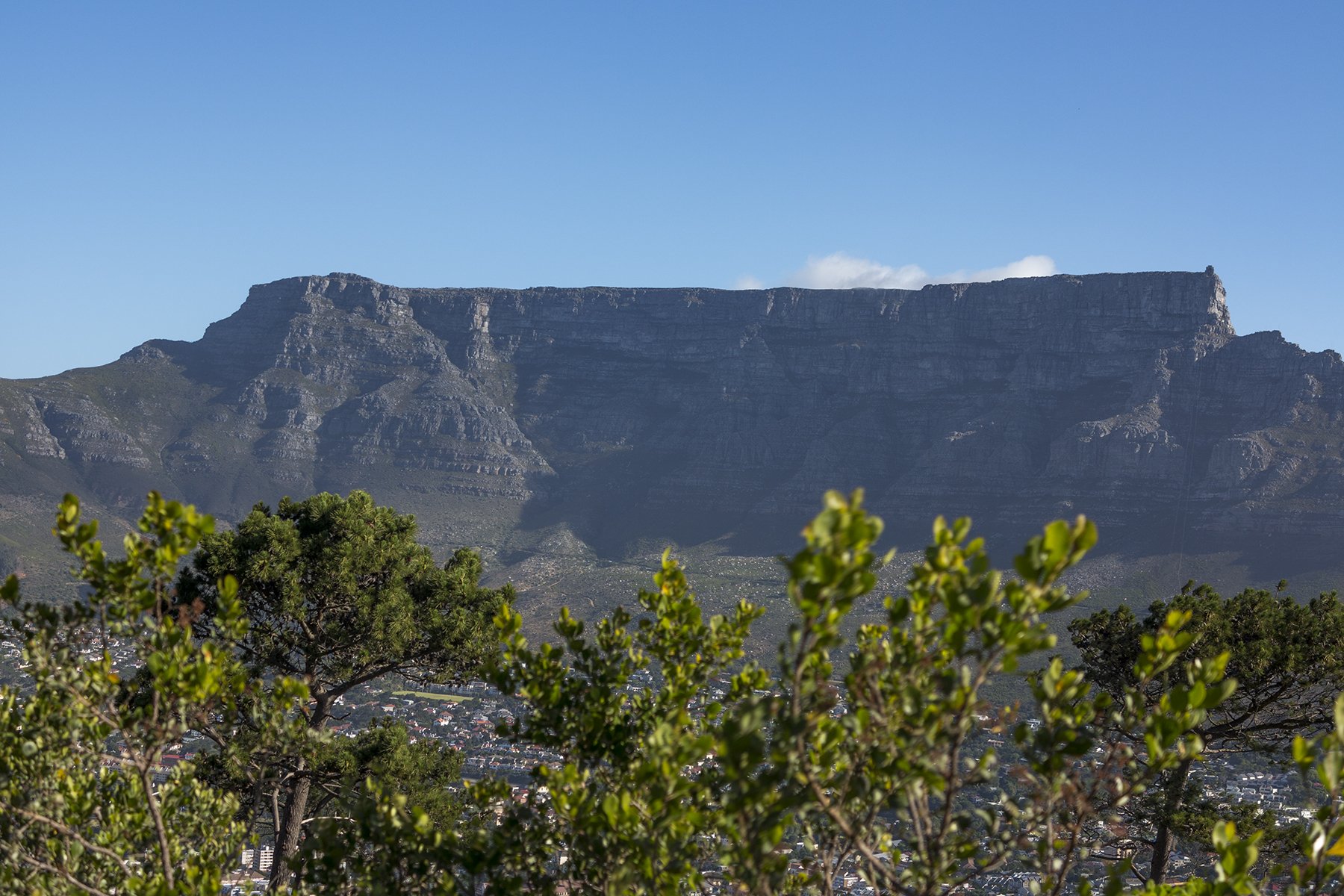