We flew into Nairobi, where much to our surprise we passed through covid, visa and passport control in a matter of minutes and found our luggage waiting. This was so unexpected after very complicated pre-flight paperwork. We were met by our guide Alex Mwangi and driver/spotter, Benson Aengwo and then taken to the Boma Hotel to stay, after many hours travelling from Spain.

We were met by Alex and Benson at 7.00 and drove to the Nairobi National Park only a short drive away. It is an incredible park 7kms from the centre of Nairobi and covers 117 sq kms at an altitude of around 1650mtrs and comprises acacia woodland, savannah and lakes. We started by driving through the woodland to the savannah where there were birds in abundance, together with a wide variety of animals. The park is surrounded by fences on 3 sides but left open on the fourth so animals can roam freely. There were 2 main lakes and the most memorable sight was hundreds of Marabou Storks basking in the sun with their wings outstretched. In total we saw 74 bird species including Helmeted Guineafowl, Crested Francolin, Yellow-necked Spurfowl, White-bellied Bustard, Three-banded Plover, Spur-winged and Blacksmith Lapwing, Little Stint, Marsh, Wood, Green and Common Sandpiper, African Spoonbill, Black-crowned Night Heron, Black-headed Heron, the first of many African Fish Eagles, Cinnamon-chested Bee-eater, Long-tailed Fiscal, Fischers Sparrow-lark, Red-capped Lark, Tawney-flanked Prinea, Northern Pied Babbler, Red-billed Oxpecker, Whinchat, Variable Sunbird, Red-billed Firefinch, Cinnamon-breasted Bunting plus many more.

A great way to start the tour. We again  stayed at the Boma Hotel.

We drove for 3.5hrs to reach Mount Kenya, the second highest in Africa. It has a highland moist forest with a wide variety of plant species depending on the altitude. We were mainly in the forest croton species areas and birding was hard and it was quiet. However we did get good species as we drove around the mountain forest tracks at 2000mtrs. The weather was excellent with perfect visibility giving us stunning views, which apparently was very unusual. Here we saw  Scarce Swift, African Palm Swift, Hartlaub’s Turaco, African Olive Pigeon, Tambourine Dove, Speckled Mousebird, Crowned Hornbill, Purple-throated Cuckooshrike, Black Saw-wing, Red-rumped Swallow, Black-collared and Grey Apalis, Waller’s and Abbott’s Starling, Cape Robin-chat, Holub’s Golden Weaver, Red-backed Mannikin and Common Waxbill. The only animal seen was the Mt Kenya Colobus monkey. We stayed at the only accommodation available in the park, the Castle Forest Lodge, which was basic but situated in  a beautiful spot.

We started at dawn birding the grounds of the Lodge looking for the key bird of the area, the Olive Ibis and we were rewarded with stunning views. It seems that this is a very difficult bird to see as it goes deep into the forest at dawn and doesn’t return until dusk. We continued and had a great 2hrs before breakfast seeing Mountain Oriole, Jackson’s Francolin, Silvery-cheeked Hornbill, Red-fronted Parrot, Hunter’s Cisticola, African Hill Babbler, Yellow-bellied and Kandt’s Waxbill, Yellow-fronted Canary, and Thick-billed Seedeater.

After breakfast we had a 6hr drive to Samburu where we stayed 2 nights at the Samburu Simba Lodge. Again  a lovely location looking out over the dry stony scrubland with few trees and bushes at an altitude of 1000mtrs in the centre of Buffalo  Springs National Reserve of 139 sq kms. We saw several new species but we were distracted by a Leopard with her cub, as well as Cheetah, and many wild animals.

We started a little later than normal and drove the 25kms to the main road and then after a short drive turned onto  a track leading to the second of the Samburu Reserves – Shaba. After 6kms we arrived at the main entrance to the 239 sq kms park and picked up a local guide armed with a rifle.

Then we drove into a totally different landscape. Lava flows had shaped gullies and waterfalls, open grasslands, rocky hills and dusty plains with  the Uaso Nyiro river running through where large Nile crocodiles can be seen. Shaba had more trees and thorny bushes with palms running along the river. The tracks were bumpy but we only saw 1 other safari car. Animals and birds were dispersed but we did see Somali Ostrich, White-bellied Go-away-bird, Crowned Lapwing, Goliath Heron, Ruppell’s and White-headed Vulture, Gabar and Eastern Chanting Goshawk, Von der Decken’s and Eastern Yellow-billed Hornbill, White-throated Bee-eater, Pygmy Falcon, Red-bellied Parrot, Pringle’s Puffback, Dodson’s Bulbul and Black-capped Social Weaver.

In the afternoon we explored other parts of the Buffalo Springs reserve. It was hard going as it was very quiet with few new species in the dry low scrub. However we managed Vulturine Guineafowl, Martial Eagle, Abyssinian Scimitarbill, Taita Fiscal, Red-winged Lark, Spotted Flycatcher, Eastern Violet-backed Sunbird and Donaldson Smith’s Sparrow-weaver.

As we were leaving we birded around the start of the springs were we saw Somali Courser, Marabou Stork, White-headed Mousebird, Fan-tailed Raven, Rufus Chatterer and Magpie Starling. We also saw  Desert Warthog, Hilgert’s  Vervet Monkey, Reticulated Giraffe,

We spent the morning birding around the Lodge, then as we left the Lodge we passed lions within 300mtrs of the Lodge and during the morning many other species including Plain’s Zebra, White Rhinoceros, Common Warthog, Waterbuck and Reticulated Giraffe. We drove a short distance to open marshes/pastures before going on a boat around part of Lake Nakuru.

We then had a 2.5hr drive to Lake Baringo where we stayed for 2 nights in Baringo  Soi Lodge where our rooms overlooked the lake. Here the temperature was high as well as the humidity but as the sun went down a good breeze came up and the evening weather was perfect. We went birding in the open scrubland and found some fantastic birds including Slender-tailed Nightjar, Three-banded Courser, Hamerkop, Northern White-faced Owl, Spotted Eagle-Owl, Beautiful Sunbird and Common Ostrich.

We started the day on board a boat at 6.30 going round the lake. Lake Baringo rose by  several meters last winter and a village, hospital ad resorts were put underwater. Even though the lake has sunk by 3 mtrs much still remains below the water. This has affected the edges of the lake where there used to be trees, bushes,  reeds and marshy areas. This has made birding more difficult and whilst we saw many species we only saw one new one, an endemic Northern Masked Weaver.

After breakfast we birded the dry and arid  acacia plains near to the escarpments where birds were scarce but interesting. In the afternoon we went walking into the acacia woods and saw 2 rarities, Jackson’s Hornbill and the Mocking Cliff Chat, which was hunting for insects on the cliff face and amongst the fallen rocks at their base.

Then we drove over the Tugen Hills, through the Kerio Valley and over the Iten Hills both 1900mtrs before reaching our destination at Kakamega Rondo Retreat where we stayed 2 nights. This Lodge is in extensive and beautiful grounds with chalets dotted around the gardens.

This morning we birded the grounds at 6.30 for 1 hour. Unfortunately the overnight rain was still clouding the sky and the light was bad. After breakfast we drove to a different part of the forest, but as always birding is difficult but we added some new species. Over lunch we had a thunderstorm but after it passed we were able to visit another part of the forest, where again we saw some difficult species. Today we added Black-billed Turaco, Crowned Eagle, Black Sparrowhawk, White-headed Wood Hoopoe, Blue-headed Bee-eater, Yellow-rumped Tinkerbird, Yellow-crested Woodpecker, Chestnut and Brown-throated Wattle-eye, Luhder’s Bushshrike, Sharpe’s Drongo, Red-tailed Bristlebill, Yellow-throated Leaflove, Kakamega and Cabanis’s Greenbul, White-headed Saw-wing, Chubb’s Cisticola, White-chinned Prinia, Black-throated Apalis, Black-faced Rufous Warbler, Turner’s Eremomela,  African Thrush, African Stonechat, Amethyst and Olive-bellied Sunbird and Grey-headed Sparrow.

This morning we birded the lush and extensive gardens, lakes and forest within the Lodge grounds. Then on to another part of the forest but it was very quiet and not many birds were seen. However we did manage Great Blue Turaco, Hadada Ibis, Grey-throated Barbet, Jameson’s Wattle-eye, Mackinnon’s Fiscal, Joyful and Yellow-whiskered Greenbul, Stuhlmann’s Starling, Green-headed Sunbird,Dark-backed and Brown-capped Weaver,  and our most exciting spot an Equatorial Akalat.

Then after an early lunch we drove 2 hrs to Lake Victoria where we checked into the Kisumu Sovereign Hotel. Then immediately off to the lakeside which had reed and papyrus beds. Here we had some excellent birding until a thunderstorm drove us back to the hotel, where in the carpark we found a Black-headed Gonolek, African Paradise Flycatcher and Black-winged Kite.

Then we had a 6 hr drive to Lake Naivasha where we stayed two nights at the Lake Naivasha Sopa Lodge. Our room  was a good 10mns walk from the restaurant but it had the great advantage of looking out over the lake. We birded the extensive grounds of the lodge, walking amongst Giraffe, Zebra and Waterbuck, with them often less than 30 mtrs away. Very exciting and beautiful to be able to get so close to wild animals.

In the afternoon we stopped on our way back to the Lodge and explored a heathland but a thunderstorm broke and we continued our drive back.

When we reach the Lodge the weather was beautiful and we went out immediately into the acacia woods and had some great birding seeing Diederik and Claas’s Cuckoo, Long Crested Eagle, Green Wood and African Hoopoe, Red-fronted Barbet, Lanner Falcon, Rattling Costicola, Yellow-breasted Apalis, Black-lored Babbler and  Abyssinian White-eye.

After checking out and having many pictures taken of us next to wild zebra, giraffe we went to Lake Naivasha and had 1.5hr boat trip. The lake has been devastated by the increase in the water level. This is similar to Lake Baringo where the water level has swamped a hospital and a beautiful Lodge where we stayed some years ago. This has resulted in hundreds of meters of dead trees and bushes lining the lake. There were no reed beds either and this has seriously affected the wildlife. We did see Blue-billed Teal, Yellow-billed Duck, Black-winged Stilt, Long-toed and Wattled Lapwing, Jacana, Bar-tailed Godwit, Ruff, Grey-headed Gull, Yellow-billed Stork, Reed and White-breasted Cormorant, Squacco Heron, Giant and Pied Kingfisher, Tropical Boubou, Brown-throated Martin and Mosque Swallow.

We then  set out on our 5hr drive to the Masai Mara and after passing a large town Norok we stopped by chance at Restaurant Olare and as we ate our packed lunch in  the carpark we saw Vitelline and Village Weaver, Swahili Sparrow, Schalow’s Wheatear, Hildebrandt’s Starling, Grey Woodpecker and Little Bee-eater and European Roller as we were driving.

We arrived at our last lodgings, Masai Sentrim Camp where we stayed 3 nights. We had a very large tent on a raised platform with a pitched wooden roof and with a balcony looking out over the grounds was the perfect location to finish our tour. Over the next 4 days we saw many birds and animals.

We enjoyed the grounds on our first night than drove to all parts of the park on different days. We saw where the Wildebeast cross the Mara river but unfortunately were a day late as they had already crossed. Nevertheless there were thousands of animals staying the Kenyian side. We had picnics under the only tree permitted by the Park authorities. Its called The Desert Date tree and they are the flat-topped trees which grow on their own and are spaced out by 100’s of metres.

As we go to more remote places than the normal safari vehicles we saw all the species and had fabulous close up views, from 10mtrs of 3 lions lying in the shade of a Date tree. Always when you go birding you see all the animals, usually close by.

Many other common species were seen but not included in the above review.

In total we saw  380 species, stayed in some spectacular locations and had great weather apart from 2 short thunderstorms. 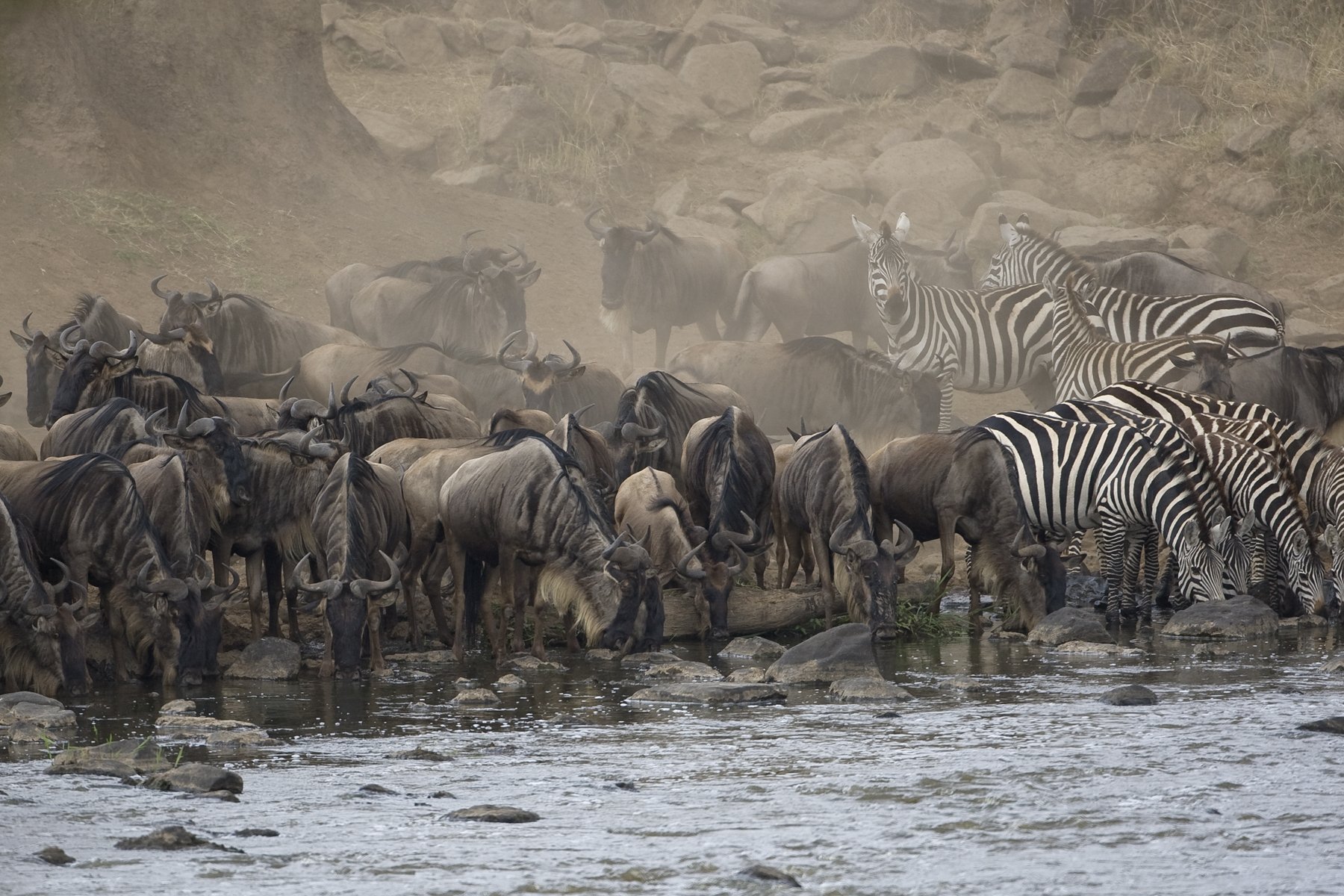