Day One – Two
Before starting with a Galapagos Cruise it is wise to be in Quito in time. We always advice to be there at least one day earlier, to avoid whatever delay problems.
We have planned a stay in a hotel Fuente de Piedra. You will be pick-up at the airport and all the formalities are going smoothly and nothing to worry about.
We can organise a day out for birding in one of the nearby Nature Reserves.

Day Three
Your flight from Quito (via Guayaquil) lands at Baltra airport in the Galapagos Islands. The Baltra airport was originally constructed by the U.S. military during World War II as a base to protect the Panama Canal from enemy attack. During this period most of the indigenous fauna of the island was exterminated. Land iguanas have only recently been successfully re-introduced and can be seen near the Baltra airport. Baltra is currently an Ecuadorian naval base and is not within the boundaries of Galapagos National Park.
Black Turtle Cove is a mangrove swamp on the north shore of Santa Cruz Island. We anchor our boat at the entrance to the cove and enter the area in our panga or dinghy. In the smaller and most interesting areas of the cove it is prohibited to use a motor so we paddle the dinghy for a wonderfully quiet journey through this beautiful and unique area.
There are a number of small passageways that without our guide we would be unable to find. We move some branches of a mangrove tree and duck under a branch as our guide and marinero manoeuvrers us through a very small passage. This is a great place to see large schools of Golden Rays, Green Sea Turtles (they are on the rare and endangered species list), White-tipped Sharks, Galapagos Sharks, Lava Herons, Yellow Warblers and a variety of other bird species.

Day Four
Rabida, one of the special features of this island is its remarkable red color, which is a result of the high percentage of oxidized iron in the composition of the lava. Flamingos and White-cheeked Pintail Ducks can be seen in a salt-water lagoon near the beach. In the saltbushes that encircle the lagoon, Brown Pelicans build their nests. It is rare to see the offspring of these birds elsewhere. Walking up to the south-eastern part of the island, there is an observatory from which the startling red color of the beach and the rocks can be appreciated.
Puerto Egas, the landing is on a black beach with eroded rock formations in the background. The trail crosses the dry interior, where the remains of a salt-mining enterprise can still be seen and then continues along the coast. Intertidal pools are home to a variety of invertebrate organism. Land iguanas are scattered around feeding on exposed algae while Oystercatchers try to capture Sally Lightfoot Crabs. The lava and the black sand seem to catch fire and the animals acquire a surreal quality.

Day Five
Bartolome is famous for its Pinnacle Rock, which is the most representative landmark of the Galapagos. Precariously walking on the rocks at the base of the Pinnacle Rock are Galapagos Penguins, the smallest species of penguin and the only one found north of the Equator. At the beach on the southern side, there are nesting sea turtles (in season), wading in the shallow water near the shore. White -tipped Reef Sharks patrol close to shore. The site is like a vulcanologist museum, an eruption site left untouched after the explosion. If it weren’t for the small lava lizards scurrying around, the pioneer Mollugo plants, and the gravity, the visitor could be well walking on the surface of the moon.
North Seymour is also one of the islands uplifted by underground seismic activity. It is considered as one of the best places to see Blue-footed Boobies and admire their courtship dance. The visitor trail on North Seymour is approximately (2 km) in length crossing the inland of the island and exploring the rocky coast. Along the way the trail passes colonies of blue-footed boobies and magnificent frigatebirds. Frigatebirds are known for the large red pouch on their necks. During mating season the males throw back their heads, inflate the pouch (sometimes to the size of a soccer ball), and shake trying to capture the attention of female frigates. Boobies and frigates share an interesting relationship. Sharing the same nesting area on North Seymour blue-footed boobies nest on the ground making their nests from the twigs of the palo santos trees, while the magnificent frigate bird nests just above them in the saltbushes. Blue-footed boobies are great at fishing. Hunting off-shore, In contrast to the booby, frigates are poor fishers. Their bodies produce very little oil for their wings and they are not waterproof. Unable to spend time in the water fishing they must rely on food stolen from other birds to feed themselves and their young.

Day Six
Santa Cruz is the second largest island in the Galapagos. The small town of Puerto Ayora is the economic centre of the archipelago, with the largest population of the 4 inhabited islands. A ten minute walk from the Centre of town, the Charles Darwin Research Station is the working Galapagos based branch of the international, non-profit Charles Darwin Foundation, a visit to the Charles Darwin Research Station is included in all cruises of the islands. Visitors learn about natural history, issues concerning the islands, and see the tortoise breeding and rearing project at work. Tortoises of different subspecies are prepared for reintroduction to their natural habitats.
Journeying across Santa Cruz into the highlands visitors are delighted by the island’s variety of life and geology. Beginning at the coast and travelling across Santa Cruz the road departs from Puerto Ayora climbing through the agricultural lands and into the mist covered forests. Santa Cruz possesses all of the various life zones present in the archipelago. As you travel through these zones birders are enchanted. Whether it’s the bright red feathers of a vermillion flycatcher or one of Darwin’s Finch almost every bird present in the islands can be found here. Santa Cruz offers excellent opportunities for viewing wild tortoises. Tracking tortoises is not the only exciting activity to be found in the highlands. There are also plenty of lava tubes, sinkholes and craters to explore. Theses eerie formations offer a fascinating hike into the belly of the island to view its volcanic make-up.

Day Seven
San Cristobal or Chatham, the easternmost island of Galapagos is also one of the oldest. Eroded volcanic peaks in the northern part of the island and rich vegetation in the southern portion characterize the island. Puerto Baquerizo Moreno is the provincial capital of the Galapagos and the second largest settlement area in the islands and home to one of the island’s two main airports. It originated as a penal colony more than a hundred years ago. Now a sleepy town overlooking the harbour known for its relaxed attitude. The beaches near town are one of the few places where visitors are allowed to camp in the islands, the National Park Information Site located just outside of town is happy to provide information. There are a number of hotels and restaurants available for those interested in staying a few extra days in the area to explore some of the local visitor sites.
Leon Dormido is the name of a magnificent rock in the middle of the sea with the shape of a sleeping lion. Small vessels can pass through the rock, which is divided into two parts forming a channel between them. Home to masked boobies, blue-footed boobies, red-billed tropic birds and frigates, this is also a wonderful location for snorkelling.Perhaps one of the nicest beaches in the Galápagos is Cerro Brujo – a huge expanse of fine white sand that feels like sifted flour between your toes. It’s home to a colony of seal ions and blue-footed boobies, and you’ll find egrets and great blue herons behind the beach in a lagoon. There’s also great snorkelling in the turquoise waters.

Day Eight
Isla Española, which is the southernmost island of the archipelago and because it is so isolated, has a high proportion of endemic fauna. Points to be visited on the Island are: Gardner Bay, offering a great possibility for the visitors to enjoy some beach time in the Galapagos. Here, the extroverted mockingbirds sit on top of visitor’s hats, peck at their feet and investigate their belongings. Punta Suarez, is one of the most popular and attractive visits at the Galapagos. The quantity and variety of wildlife at this site are remarkable. When landing, young sea lions surf the breaking waves, while a few steps inland groups of the Española variety of iguanas bask in the sun. Further inland, masked and blue-footed boobies nest almost right on the trail, Galapagos doves peck around unaware of visitors and finches go about their business in the bushes. The trail continues toward the cliffs and the blowhole, a fissure in the lava where water spurts high in the air like a geyser. Also Swallow-tailed Gulls and Red-billed Tropicbirds can be seen. Further up the cliff, in an area of low-lying reefs, is the only place where the Waved Albatross nest.

Day Nine
Floreana Island, an island with beautiful visitor’s sites and some strange stories. Located approximately 4 to 5 hours west of Española and equal distance south of Santa Cruz, this island has long been a favourite site of visitors including pirates, whalers and early settlers. In 1793 British whalers established the Post Office Barrel to send letters to and from England. This tradition has continued over the years, and even today visitors may drop off and pick up letters, without stamps, to be carried to far destinations.
Punta Cormorant offers two highly contrasting beaches. The landing beach is of volcanic origin and is composed of olivine crystals, giving it a greenish tinge. At the end of the short trail is a carbonate beach of extremely fine white sand. Formed by the erosion of coral skeletons, it is a nesting site for green sea turtles.

Day Ten
The last day on the Galapagos. Before leaving we will visit Las Bachas, a white sand beach ideal for swimming on the southwest side of Santa Cruz. Las Bachas refers to the indentations left in the sand by laying turtles or departing hatchlings. It is home to a variety of wildlife. 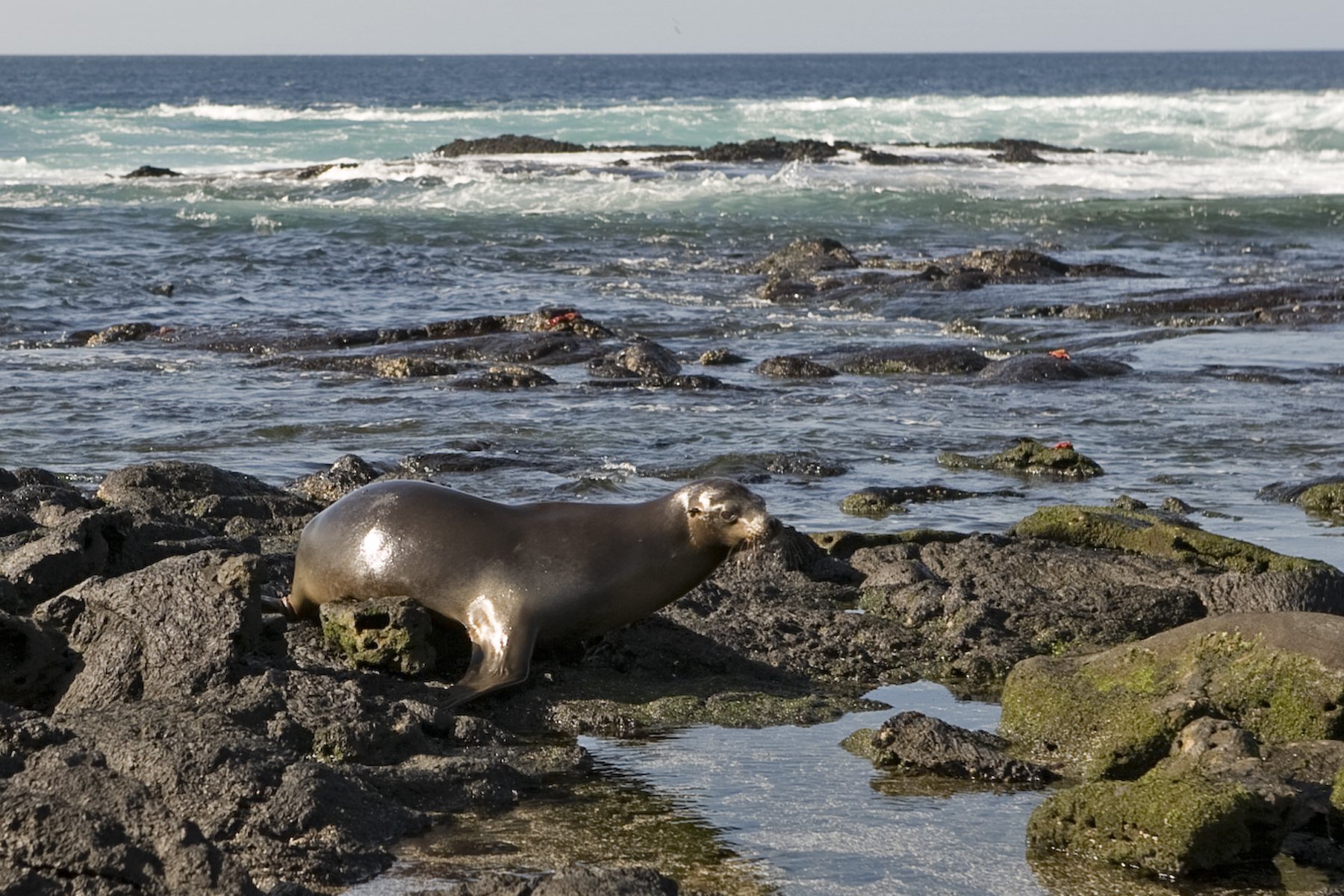